So apparently Joe Hill got the opportunity a while back to pitch some story ideas to the BBC for Doctor Who.  I’m assuming that if you’re reading a blog like this you already have some idea who Hill is. If not, to paraphrase Lewis Carroll on Gryphons, “look at the Wikipedia entry.” The pitches were carefully vetted by Neil Gaiman, who had earlier written one of the better episodes (IMO) from Matt Smith’s tenure on the show. A few weeks later the Beeb emailed Hill back saying that they didn’t let American writers work on Who, and that if they did, they wouldn’t use him.

This has already gotten a lot of coverage online, unsurprisingly, The Rejection being called “savage,” especially in light of Hill’s credentials (he’s written some pretty good books) and the fact that his dad is Stephen King. In the near future, I’m expecting to see either some kind of apology/justification/explanation from the nice folks at the BBC at some point, as well as a lot more ranting and jumping on the bandwagon from the anti-Jodie Whittaker crowd and probably also would-be fiction writers. I guarantee you, this thing is going to be heavily discussed at fiction workshops all over the hills and beyond. You should also expect a bit of sourpuss backlash directed at Hill, to the effect that he’s been spoiled by his success, which maybe he doesn’t entirely deserve, and ooo, he can’t ride on Daddy’s coat-tails forever, blah, blah, blah. It’s going to be a mess. That’s why I’m writing this now, even though I’ve neglected this blog for some time.  Like, a long time.

So, a couple of things.  First, I think it’s pretty clear from any of the accounts we’ve seen that Hill handled himself professionally throughout the whole business, both before and after. He apparently worked hard on the pitches, and having Gaiman vet them is…well, it’s what you’re supposed to do in these cases. His account of the fatal rejection letter came up during a Brian Keene podcast, in answer to an innocent question from Keene inquiring on any passion projects Hill had in the works.  So, no “open letters” online, no crowbarring the story into interviews, etc. If he spoke up about The Rejection instead of keeping his mouth shut and saying, yeah Brian, I’m finally writing that thing I’ve been talking about, well…can you blame him? He was with other writers at the time, and you don’t get a lot of opportunities to vent about writing stuff otherwise.

It seems to me the biggest factor in The Rejection is not the fact that Hill is American (why an antipathy to American writers working on Doctor Who wouldn’t have been made clear to Hill’s agent at the outset is beyond me) but something involving Hill himself. Probably to do with the fact that much all of what he writes is “dark fantasy” or horror, and parenthetically with the fact that his father is very probably the best-known horror writer of all time.  So, Hill must be a nasty little man who writes about serial killers and monsters under the bed, which is tasteless and declasse. Even though the Brits would handily win the Nastiness in Horror Fiction Sweepstakes. I mean, I’ll put Shaun Hutson & Guy N. Smith up against the classic splatterpunks anyday, and I mean that as a compliment.

Point being, if that’s the BBC’s attitude, so be it. It’s not something we’ve never seen before, is it? Likewise so be it if the BBC (or, more to the point, whoever it was who wrote the email) wants to get their ya-yas out on some poor writer with catty emails.  Listen: a lot of young writers are going to be gobsmacked by this thing, and if you teach a fiction workshop or English seminar, that’s something you might consider making clear to them: there are no rules for rejection. The person rejecting you can do it any way they like. They’re perhaps less likely to do it if they represent a monolithic concern like the Beeb that can, you know, fire them, but Hill’s experience makes it clear: they’re under no real compulsion to be professional or, god forbid, nice. They can be as bitchy as they want, and if you’re the writer on the receiving end, it’s going to make you feel like you just took a punch in the gut. Similarly, you can respond to the bitchery any way you want, but it’s not going to reform the editors/producers or erase that awful taste in your mouth. The only effective way to deal with it is to move on. Write the next story/book/poem/screenplay. Send it off with a god-bless-you and a fond wave of the hand.

And maybe buy a copy of Hill’s latest book instead of borrowing it from the library. Or ripping it off some Torrents site. And if you like his work enough to show up at a signing or a convention he’s appearing at, tell him “you’re one of the good ones, Hill.” And move on. Because that’s the way you beat the bitches. 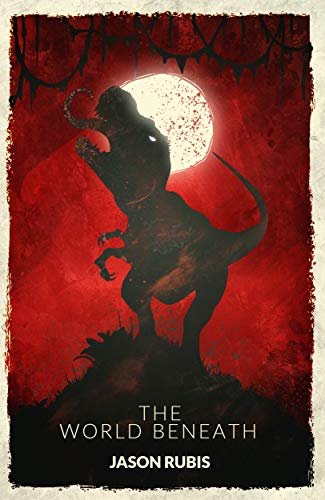 THE WORLD BENEATH, my second creature novel and follow-up to TERROR BIRDS is now available from Severed Press and I'm kind of excited about it!  Dirk Bannerman, an American slacker toiling away as a laborer in South America, is recruited by eccentric scholar Theophilus Chalmers to help him find a subterranean world he believes is home to an ancient lost race.  Along the way there are mutants, serpent folk, sexy cave-wimmens and LOTS of dinosaurs--as well as possibly the most manic manic pixie dreamgirl you'll ever encounter!  Perfect for holiday readin' and those late-night cryptozoological bull-sessions with your Uncle Harold.  Get it from Amazon & all the usual suspects!

I had a lot of fun with this one.  It's available in both ebook & paperback from Amazon & other fine online retailers! 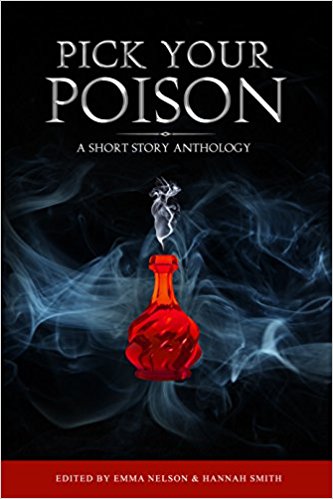 Pick Your Poison, a new anthology of poison & poison-themed stories, is out today from Owl Hollow Press.  A very nice line-up of stories, including my own "The Toxicist's Daughter," and a beautiful cover!  Get it at Amazon!

For some reason I borrowed CURSE OF THE BLUE FIGURINE from my local library recently, which got me thinking about its author, John Bellairs.  That led me to Google, where I was surprised to learn that a film adaptation of THE HOUSE WITH A CLOCK IN ITS WALLS was in the works, with none other than Jack Black pegged to play Jonathan Barnavelt.  I like Black, and I can just about see him as Uncle Jonathan, though if I were in charge of like everything and like ran the universe or something, I would have resurrected Zero Mostel from beyond the grave for the role.  Eli Roth (of HOSTEL??) is supposedly gonna direct...I'm thinking that's a good thing; maybe Roth will give the project a darker tone than, say, GOOSEBUMPS.

Still, as you might guess, I'm a bit ambivalent about the news.  If the film is successful, it might lead to a string of other Bellairs books hitting the screen, and...I dunno.  Bellairs is one of those writers who never really hit the big time, but who keep getting rediscovered and cherished by enthusiastic fans, even those much older than his books' usual audience.  Old or young, it's hard not to feel kind of proprietary about him.  All his kids' mysteries (HOUSE and its successors, as well as the Anthony Monday and Johnny Dixon novels, and a few others I don't think I knew about) were brought back into print recently by Open Road Media with simple but attractive cover designs (looks like the Edward Gorey illos got left out though, which is a big ol' sad-face).  It's certainly nice to have them all readily available through Amazon.  Open Road also brought out a new edition of Bellairs' classic THE FACE IN THE FROST, ostensibly an "adult" fantasy but one that could easily be enjoyed by middle-graders.  FACE juggles screwy humor worthy of vintage Warner Bros' cartoons with the cosiness of Milne & C.S. Lewis and a genuinely nightmarish vibe right out of M.R. James.  Like most of Bellairs' kids' books, it features eccentric wizards who get pulled into a quest to save the world from the ghost of an evil colleague.  It doesn't sound like much from my description, but it really has to be read to be appreciated.  It's been one of my favorite novels ever since Lin Carter (HIM again!) steered me in its direction via the pages of his IMAGINARY WORLDS.

I've often wondered about a film version of FACE IN THE FROST.  It could be incredible, but I have an awful feeling it would end up colorfully animated, with a regrettable focus on the zany humor (Sacha Baron Coen as Prospero?).

There's no doubt that the film of HOUSE WITH A CLOCK IN ITS WALLS is brought to you courtesy of the good folks at Let's-find-something-kinda-like-Harry-Potter-and-run-it-into-the-ground.com.  I guess we can be thankful Bellairs wasn't rediscovered by this crowd earlier, and remained ours just a little longer.

I haven't been very good about updating, but until a few months ago, there hasn't been a lot to report.  That's started to change, slowly but surely.

A story of mine called "Mischa in the Window" recently appeared in the venerable dark fantasy mag WEIRDBOOK to some very nice reviews.  I've also got another new tale, "The Toxicist's Daughter," set to appear in Owl Hollow Press's PICK YOUR POISON anthology, and several others are being looked over by editors.

Definitely take a look at the WB website at www.weirdbook-magazine.com and keep an eye here for (hopefully) more good news.

Now if I can just figure out how to post images in this new version of livejournal they snuck in whilst I was daydreaming in Deep R'Lyeh.

Today my story "Gather Together Tonight" is featured on Circlet Press's Advent Calendar.  It's a vampire story, so probably more appropriate for Halloween...yet in a funny kind of way it's about holidays and joy as well.  You can read it at www.circlet.com.

My steampunk story "Nightingale," originally published in Circlet's Like Clockwork antho, is currently featured as part of Nobilis Erotica podcast series.  You can access it at https://nobilis.libsyn.com.  To actually hear Nobilis' reading, go to the Friday September 26 post and click on the "Direct download: NobilisErotica_311.mp3" link at the bottom.  I still don't have any clear idea of what a podcast is, and by the time I managed to get the player up I succeeded in getting myself kicked off again.  I should really go back and try to listen, but...eh.  I'll get to it.  I'm sure Nobilis does a fine job and I'm definitely happy to see the story get a chance to find some new readers. 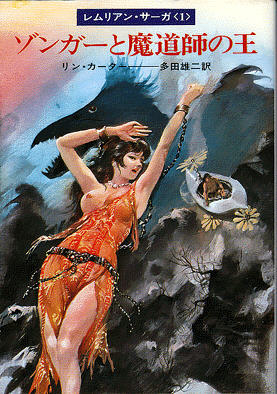 Kind of an interesting take on the material, well outside the usual Frank Frazetta/Boris Vallejo stereotypes.  I guess the anime-looking chick is supposed to be Sumia.  Nice boobs.  The skeksis-looking shadow up top I take to be either a lizard-hawk or one of the Dragon-Kings.  Check out the giant-ass daisies on the airboat...dude, that ain't "barbarian" that's HANNA Barbarian.  Or are those supposed to be propellers? 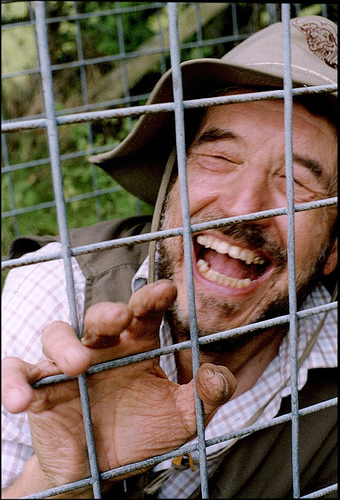